Players in Michigan, New Jersey, Pennsylvania and West Virginia can now experience one of NetEnt’s most successful European game launches 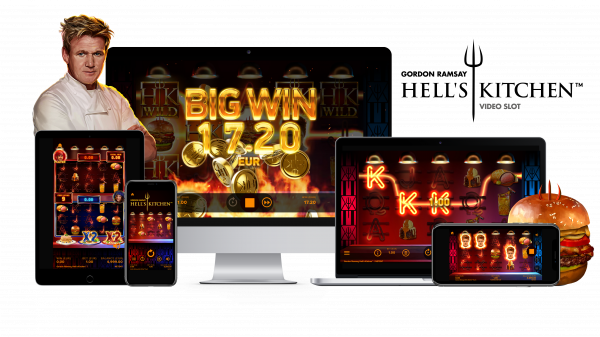 NetEnt, the premium casino content supplier, which is part of Evolution Group, has launched its blockbuster branded slot Gordon Ramsay Hell’s Kitchen in the US.

Available to players in Michigan, New Jersey, Pennsylvania and West Virginia, the game has been a chart-topping success for the studio in Europe since it was released in March 2021.

Gordon Ramsay Hell’s Kitchen is one of NetEnt’s top performing launches of all time from day one, accumulating almost 2 million unique players since being launched.

The game is a 5-reel, 3-row video slot based on Hell’s Kitchen, the international reality TV show featuring the celebrated chef.

Combining Ramsay’s signature dishes and cutting catchphrases, it captures the emotionally charged atmosphere of the series, with flying knives, pots and plates in the Ramsay’s Wilds feature that randomly puts up to seven Wild symbols on the reels in the main game.

Players pick a side, and if their team wins, they enter Gordon’s Bonus Game, where Multipliers and random prizes of up to five times the bet are hidden behind the Gordon Ramsay Hell’s Kitchen video slot menus.

“Branded games have been a pillar of NetEnt’s slot offering for years. It’s exciting, working with such a diverse range of acclaimed brands, and we’ve been part of some brilliant partnerships. Gordon Ramsay Hell’s Kitchen is a perfect example and has already been a great release for us in Europe. It has all the ingredients of a successful licensed slot: a famous brand with a global following, mixed with vivid gameplay and engaging features. So, the US launch has been a date we’ve been looking forward to for a long time,” said Jeff Millar, Commercial Director at Evolution, North America.

“A lot of work goes into these licensed games – their ability to attract new and casual players is a big draw, and they’re a crucial element to operator portfolios. But we also have a responsibility – both to the brand and to its following – to make sure we’re delivering a game that brings the essence of that brand to life. US players are going to love this release and we’re excited to be bringing it across the Atlantic.”

NetEnt is a leading digital entertainment company and part of Evolution Group AB, the premium provider of online casino content. It supplies high quality gaming solutions to the world’s most successful online casino operators. Since its inception in 1996, NetEnt has been a true pioneer in driving the market with thrilling games powered by a cutting-edge platform. With innovation at the core of the company ethos, its talented team takes pride in delivering flexible digital casino solutions, so that its network of more than 200 global partners can provide their players with the best in immersive entertainment. NetEnt holds licenses in Alderney, Belgium, Gibraltar, Malta, Romania, Spain, and the UK, as well as the U.S. states of Michigan, New Jersey, Pennsylvania and West Virginia. Learn more at: www.netent.com

Several days ago, the head of the state Gaming Control Board announced that sports betting…

Pragmatic Play, a leading content provider to the iGaming industry, has further broadened its offering…

Be Part of Poker History; Qualify for the 2023 EPT Paris Main Event